The combination of Cinedeck EX with Sony F3 cameras enabled the production to solve budget, performance and space constraints during the shoot, with Cinedeck EX also delivering a fast uncompressed, file-based camera-to-post workflow for the editorial and VFX teams.

The experience of working the Sony F3’s with uncompressed S-Log footage, and desire to optimize theatrical picture quality, has led the filmmakers to work on the Academy Of Motion Pictures Arts And Sciences’ IIF-ACES color-encoding specification, and the development of a new Input Device Transform for the F3. 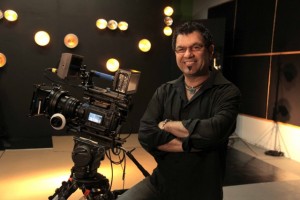 The Ghost Of Goodnight Lane was written and directed by Alin Bijan, and produced by award-winning Dallas, Texas, production company Media World Studios, in association with FTG Media (www.MakingFilms.com). The production, featuring an angry ghost with evil intentions, is a comedy horror about a movie being made in a haunted film studio, and was inspired by paranormal events that occurred at Media World Studios. It stars Billy Zane (Titanic), Lacey Chabert (Mean Girls), Danielle Harris (Halloween), Matt Dallas (Kyle XY) and Richard Tyson (Black Hawk Down).

Principal photography took place over 22 days, with two Cinedeck EX systems capturing from A and B Sony F3 cameras. All footage was recorded from the F3s as 10-bit, uncompressed, RGB 4:4:4, S-Log gamma-encoded imagery. Live action was output from Cinedeck EX in Apple ProRes 4444 for Final Cut editorial, and green-screen elements output as uncompressed 4:4:4 for VFX work and compositing. Over a quarter of the movie, 25 scenes, was shot for VFX treatment. Multiple SSD cards were used to transfer the uncompressed footage to the editorial and VFX teams.
In addition to rigorous schedule and the tight budget, typical of an independent production, the production crew also faced restricted shooting environments, as many of the sequences were to shot in cramped spaces.

In preparation for the shoot, Bijan and his crew carefully investigated how innovations in camera, recorder and monitor technologies could solve these issues, while delivering the highest possible quality file-based workflow to streamline the camera-to-post workflow. 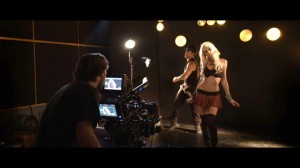 Considering all of these elements, the crew decided to shoot the entire movie using new Sony F3 cameras, with dual Cinedeck EXs at the heart of the camera-to-post pipeline.

“We knew we’d be facing a mountain of challenges in production, so we decided to let leading-edge technology lead us to the best pipeline,” said Bijan. “In the Sony F3 I found a camera that I could move around quickly and shoot sequences fast, but with extremely high quality. I also needed a recorder that did much more than just record. Assessing all the different kinds of recorders, we discovered Cinedeck EX offered more in one little device than anything else out there. It matched our physical space requirements, and more importantly, it enabled us to record S-Log uncompressed RGB 4:4:4 from the Sony F3 and deliver those files directly, and quickly, to post for editing and compositing.”

Jonny Revolt, editor The Ghost Of Goodnight Lane, commented, “When you’re shooting a film with so many VFX scenes, Cinedeck EX’s ability deliver ready-to-composite, uncompressed content, without the need to convert file formats, is a huge time and money saver. The post crew could begin working in the full S-Log color space immediately, and this gave us the comfort of being able to test VFX keys live on set.”

Summing up his experience shooting with the Sony F3 and Cinedeck EX, Bijan said, “I need the right tools to help me tell my story, and Cinedeck EX makes filmmaking so much easier. We took full advantage of its advanced capabilities to shorten the distance between production and post – that’s the wonder of file-based workflows. Cinedeck EX helped me to tell a better story and make a better film, because I didn’t have to worry about my workflow, and that’s half the battle in indie film-making.”

The desire of the filmmakers to maintain the cinema-grade quality of the Sony F3 footage for theatrical release, afforded by Cinedeck EX, has led to a collaboration with the American Society Of Cinematographer’s Curtis Clark ASC, chair of the ASC’s Technology Committee, to develop an Input Device Transform for the Sony F3. This will conform to the Academy Of Motion Pictures Arts And Sciences’ Image Interchange Framework (IIF) ACES color-encoding specification, and streamline an ACES workflow – from camera to grading to finished output.

The Cinedeck EX & Sony F3 Advantage
The Sony F3 with S-Log has rapidly emerged as a sought-after, high-end digital camera for productions seeking file-based workflows across a wide range of production environments. These include 10-bit uncompressed, RGB 4:4:4 baseband output, with S-Log Gamma encoding for external recording, an important feature for customers requiring an HDCAM-SR™ workflow.

Along with a powerful, but simple, file-based workflow, Cinedeck EX delivers a number of unique benefits to filmmakers and cinematographers using the Sony F3 with S-Log, including:

Cinedeck EX starts at $8495 and features unparalleled flexibility with the widest range of edit-ready formats available on a single device. The following formats come standard and are supported natively on Cinedeck EX:

Founded by cinematographers, and headquartered in the heart of New York City, USA, Cinedeck manufactures innovative, touchscreen recording systems for use with all popular digital cinematography cameras. Along with on-set monitoring, playback and quality control capabilities, these recorders also unify camera-to-post workflows by offering the industry’s most comprehensive range of edit-ready output formats. Cinedeck EX, the industry’s first camera-mountable device, has proven essential to the workflow on hundreds of TV and cinema productions, and has won TV Technology’s “2010 STAR Award”, the “2010 Vidy Award,” and DV Magazine’s “Award of Excellence”. Continuing this pioneering spirit, Cinedeck LLC is also addressing the challenges of the mobile and outdoor broadcaster with Cinedeck RX, its new, rack-mounted, multi-format recorder, monitor and playback system. Cinedeck RX was awarded the prestigious “2011 Pick Hit Award at IBC 2011” from Broadcast Engineering Magazine. For more information, visit www.cinedeck.com.