Apple’s Spanish ISO keyboard is the absolute best tool, even if you write exclusively in English

Increased use of accent marks in USA films and TV credits

You may have observed the increase use of accented first and last names in USA films and TV credits, as well as in lower-thirds in ESPN, or in newspapers like The New York Times. Many English terms use accent or other marks, including d©jà vu, Piña Colada, and r©sum©, and some new weather terms, like El Niño and La Niña. The Apple Spanish ISO keyboard facilitates that for you, even though the first and third terms actually come from French.

The most universal keyboard on the market

Easy adjustment of MacOS X for the Spanish ISO keyboard 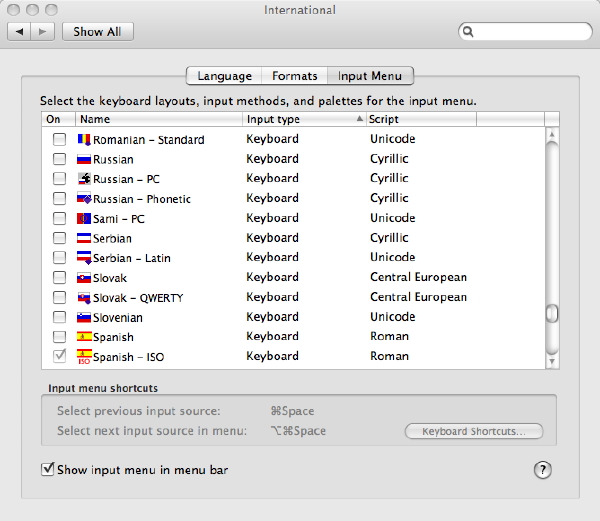 As stated earlier, the adjustment of the keyboard is independent of the language adjustment, so your menus can remain in English (or whatever other language). Just go to System Preferences>International>Input Menu, slide down to Spanish ISO, and add a check mark next to it. If you don’t use keyboard shortcut keys in Final Cut Pro, you may uncheck the check mark next to USA. If you leave the check mark next to USA, you will now have a keyboard menu in the upper right of your screen at all times. There you may select either Spanish ISO or USA and the flag will alternate.

Use of the Spanish ISO keyboard with Final Cut Pro

Fortunately, Final Cut Pro is completely compatible with the Spanish ISO keyboard. However, if you use keyboard shortcuts in Final Cut Pro, you must leave the USA keyboard active (although not selected) in the keyboard menu as indicated above, so that Final Cut Pro will react accordingly when you invoke a shortcut. In the Final Cut Pro Tools>Keyboard Layout>Customize menu you will see the result. See my screen shot above. At the top, it indicates: Spanish-ISO Keyboard Layout (Mapped from U.S. Keyboard).

Use of the decimal key on the numeric keyboard

This comment only affects external Apple Spanish ISO keyboards. This comment does not apply to the MacBook, MacBook Air, MacBook Pro, or even the new Aluminum Wireless Spanish ISO keyboard, since none of these has a numeric keyboard. So those of you who use an external Spanish ISO keyboard, you may have noticed that the decimal key is a comma, not a period. That is because in many countries (including Spain), the comma is the proper decimal character. If you would prefer to have your period back, e-mail here and I’ll send you a free, special Spanish ISO map that gives you the period back. Back before MacOS X, this was selectable in the System Preferences, but no longer.

How to get one separately

The Apple Web Store in the USA will only offer you a Spanish ISO keyboard with a new, built-to-order computer, but not seperately. If you would like to acquire one separately in the USA, go to SpanishKeyboard.us or TuTeclado.com.